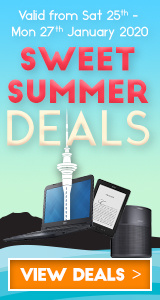 This R2-D2 astromech droid is definitely the one we’ve been looking for - and it’s available now in the PB Tech Sphero Store!

Artoo is searching for his master, and that could be YOU!

Starting out as one of five astromech droids serving on Queen Amidala’s starship he was the lone survivor of an emergency shield repair on the wing, and, as Captain Panaka said, “it saved the ship, as well as our lives." This little guy has continued to saved the day on so many occasions, wheeling his way into some of the most pivotal moments in Star Wars, from zapping buzz droids off a Jedi starfighter, to that time he rocket launched Luke’s lightsaber at the mouth of Sarlacc - this little droid even held the missing map piece to locate the last Jedi.

You can interact with your new droid via your smartphone, the new Sphero App is called "Star Wars App-Enabled Droids by Sphero" and it's available for Android and Apple iOS now. Use this app to control R2-D2 directly, going from bipod to tripod stances, or triggering super cute emotive waddles - you can even let Artoo control himself, exploring the area on his own! The app also includes neat modes that will allow you to explore the Star Wars galaxy, roam iconic ship interiors, and more, through augmented reality!

Artoo’s signature front and rear LED lights are fully functional, and with integrated speakers you can even watch the epic Star Wars movies with R2-D2 by your side and he’ll chime in with his own signature beeps and boops :)

The Sphero R2-D2 App-Enabled Droid is available now from PB Tech, but he’s not the only new robot this side of the galaxy - I sense a disturbance in the force…

Introducing BB-9E - he’s not the droid you’re looking for - he’s the droid LOOKING FOR YOU!

BB-9E is a menacing astromech droid of the First Order, the dark version of the adorable BB-8 we love, ready to roll and wreak havoc!

A vigilant and intimidating droid that’s always on high alert, control your BB-9E App-Enabled Droid at PB Tech with your smart device or let it patrol for rebels on its own :P Packing sophisticated Sphero tech, it can roll and move his dome just like his on-screen companion, and this tough exterior allows the First Order droid to weather any battle. Packed with new sensors this astromech droid will even react to your presence when he detects you!

A specialist in keeping starships and machinery fully operational with its many features, included is a very special ‘Droid Trainer Base’ that allows you to explore holographic simulations from the Star Wars galaxy and more the augmented reality features.

BB-9E will interact (beep boop trash talking like a champ) with other All Star Wars App-Enabled Droids by Sphero, and, much like R2-D2 above, you can watch the films from the Star Wars saga with BB-9E by your side and he’ll start reacting to action with his own unique personality shining through - go the DARK SIDE!

The new Sphero BB-9E and Sphero R2-D2 are the droids we've been looking for - full range available now from PB Tech! Check out the full range in-store or online today! What's next? I'm hoping for a Sphero AT-AT!